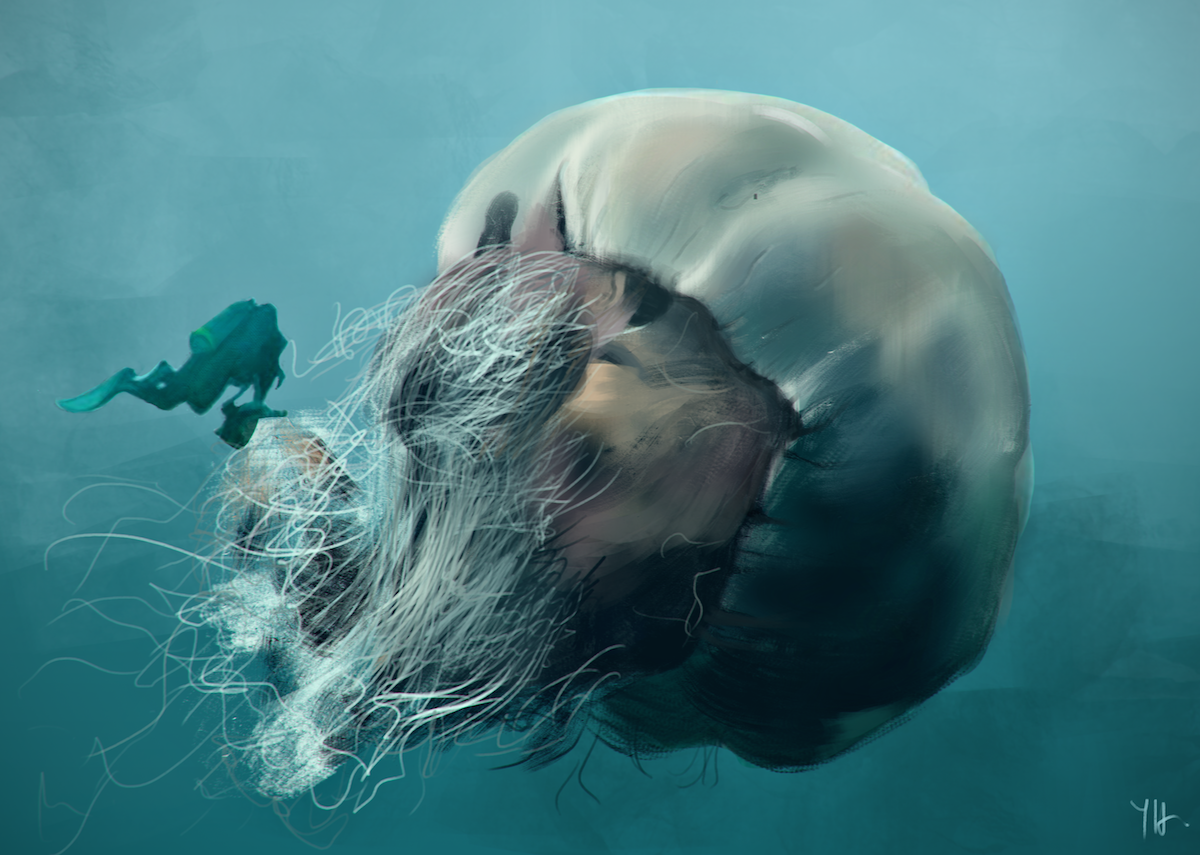 Every day since moving to Cape Cod, I have been in the ocean. No exceptions and no missed days. As the water warms up, I have been seeing more and more jellyfish in the water, as they prefer to live in warmer temperatures. I see them when I jump off bridges, paddleboard, and swim, and they are fascinating. Just yesterday, I went out paddling with two young boys and I told them we were jellyfish hunting. We found hundreds of moonies, which are non-stinging golfball sized jellyfish that you can pick up and huck at each other. Then we found a few Box Jellyfish. We spent a good half hour trying to scoop the thing up with our paddles and put it on our boards. Those things are slippery! None of us were successful in picking it up and setting it on our board because it just slips off! One of the boys got it and carefully pulled it up out of the water. And up. And up. And the tentacles kept coming. In the water, it appeared to be no more than a foot and a half long. He pulled it up about three feet and the tentacles were still coming out of the water.

The thing about jellyfish is that they are ridiculously cool. They are of the phylum cnidaria, meaning that they have no eyes, brain, or bones. They are enjoyed as a delicacy in countries such a Japan, where they are dried out and prepared. Their bodies are approximately 95% water. They eat plankton and other small ocean dwelling creatures by trapping them in their tentacles, stinging them to death, and ingesting them. Box Jellyfish are responsible for more marine deaths every year than any other animal. There have been reports of a single  jellyfish stinging over 70 people in a single day. Jellyfish stings contain a venom called a hemotoxin, which kills blood cells and can lead to cardiac arrest. Scariest of all, they can grow as big as the picture above. Yes, that is real.

Whenever I see a jellyfish, I am strangely drawn to it. I love poking their head, almost as if to taunt them and show them who’s really in control. Plus, they feel sweet. I’ll stop my board at full speed just to turn around and look at a pink pearl of the ocean, floating inches below the surface. I love watching them swim as they puff up their medusa’s head and curl it out, propelling themselves in a direction that even they do not know.

Yesterday, as I knelt on my board observing a leopard printed bulb lipping its way under me, I realized something. Sometimes, the very thing whose beauty we are drawn to is the very same thing that can kill us. Just as the sirens lured Odysseus with the beauty of their song, we are lured to our own lusts and destroyed. James 1:14 tells us that “each person is tempted when they are dragged away by their own evil desire and enticed.” I love the image of someone being dragged away by their desires. I imagine someone (me) leaning over my board to get a closer look at a jelly, falling in, and being dragged to the depths of the ocean in the agonizing grip of her tentacles.

Isn’t that just how the world works, though? It begins with an innocent girl in a sundress on a gentle August afternoon and ends in adultery, rape, or any myriad of tragic conclusions. God knows exactly how quickly one sin leads to another, and before we know it, we are an ‘addict.’ This is why, in Proverbs 5:3-8, Solomon writes:

For the lips of the adulterous woman drip honey,
and her speech is smoother than oil;
but in the end she is bitter as gall,
sharp as a double-edged sword.
Her feet go down to death;
her steps lead straight to the grave.
She gives no thought to the way of life;
her paths wander aimlessly, but she does not know it.
Now then, my sons, listen to me;
do not turn aside from what I say.
Keep to a path far from her,
do not go near the door of her house.

The wisdom of Solomon is this: recognize your lust–whatever it is that will cause you to sin–and stay away. Take another road home. Look the opposite direction.

Avoid sin as if it were country music.

Now, just let me clarify: this does not mean that we avoid prostitutes, pimps, and everyone else caught in sin. We are to run to them and love them the way Jesus did. What I mean is simply this: if there is a place you go, or a website you visit, or a movie you watch, that you know leads to lust; however innocent it may be on the surface, you avoid it. You run from it. This could mean deleting some Wayne tracks from your iPod, or tossing out your 300 DVD. Whatever it is, don’t hide temptation under the facade of innocent entertainment. Jesus told us that it’s better to have a hand (or computer, movie, magazine, friends, et cetera) cut off than for our entire body to be thrown into hell (Matthew 5:30).

Get the idea? Here’s my mawkish benediction:

Stay away from Jezebel or you will get stung.

0 comments on “Jezebels and Jellyfish”