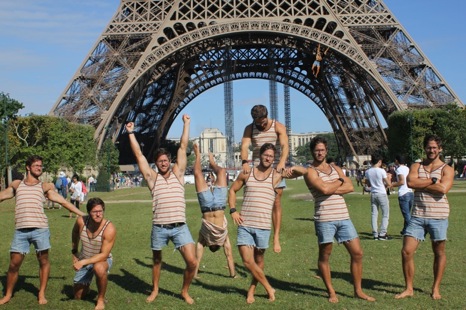 So for lack of a full-sized, detailed blog about my past trip, here are some memoir-style poetic burps and snapshots of the trip I wrote up on one of the flights. Note: they are in no way detailed or even chronological; it’s just a change from the usual. Comment and let me know how you like it!

He got up to help me get my duffel into the overhead compartment and I saw his height. His head towered three stories above his feet. I told him I know some Chinese people who have nightmares about legs that long. He told me he wrestles with leg room.

The phone rang and before answering, Izzy told me it was for me. I heard him answer with a groggy hello and then he hung up. I knew I had to put my feet on the floor and walk to the next room of the hotel. It was early. Unchristianly early. I knocked on her door and she answered in work out clothes. We did some crunches.

The van drove by full of boys my own age who had known nothing but Nigerian heat all their lives. They shouted oyibo at me, which is their name for white man. I contemplated shouting back a word I knew for black man.

He sat in the front passenger seat with is elbow out the open window. I sat directly behind him with my arm out the window. I decided to smack his elbow and tell him he hit a bird. I gave him a good scare, but he knew I didn’t have feathers.

I sat there before the tower and looked up the vast reaches of steel before me. I imagined I would feel more complete by the time I made it to Paris, but life did not freeze in some climactic epiphany. Rather, I reminded myself that I am here. Now. And there is presently nowhere else I am, so I should enjoy it, because I will spend a lot of time in my life not being here.

The stewardess came back with the basket of spare bread.  I took some and merci’d her. When she came back a third time, I asked if any bread was left. She said no, but the boy across the aisle didn’t finish his. She asked if it was okay to touch it with her fingers and I told her I wouldn’t have it any other way.

We sat outside the Parisian cafe munching on crepes and baguettes. I rolled up a piece of paper to look like a cigarette in the picture. The cafe owner took a picture of us, but it was overexposed and my paper didn’t show up. Probably for the better, though, since one day, in-laws will see it.

She asked why I had taken so long in the outhouse. I told her I had to stop and do 100 pull-ups on my way back and it doesn’t really take me that long to poo.

I had made it a goal to kiss a local girl during the 8 hours I was in France. Now I know how it feels…to fail to achieve my goals.

She sent me a message saying hurry up and come home! I told her I’m trying, but that’s the trouble with scheduled airline reservations.