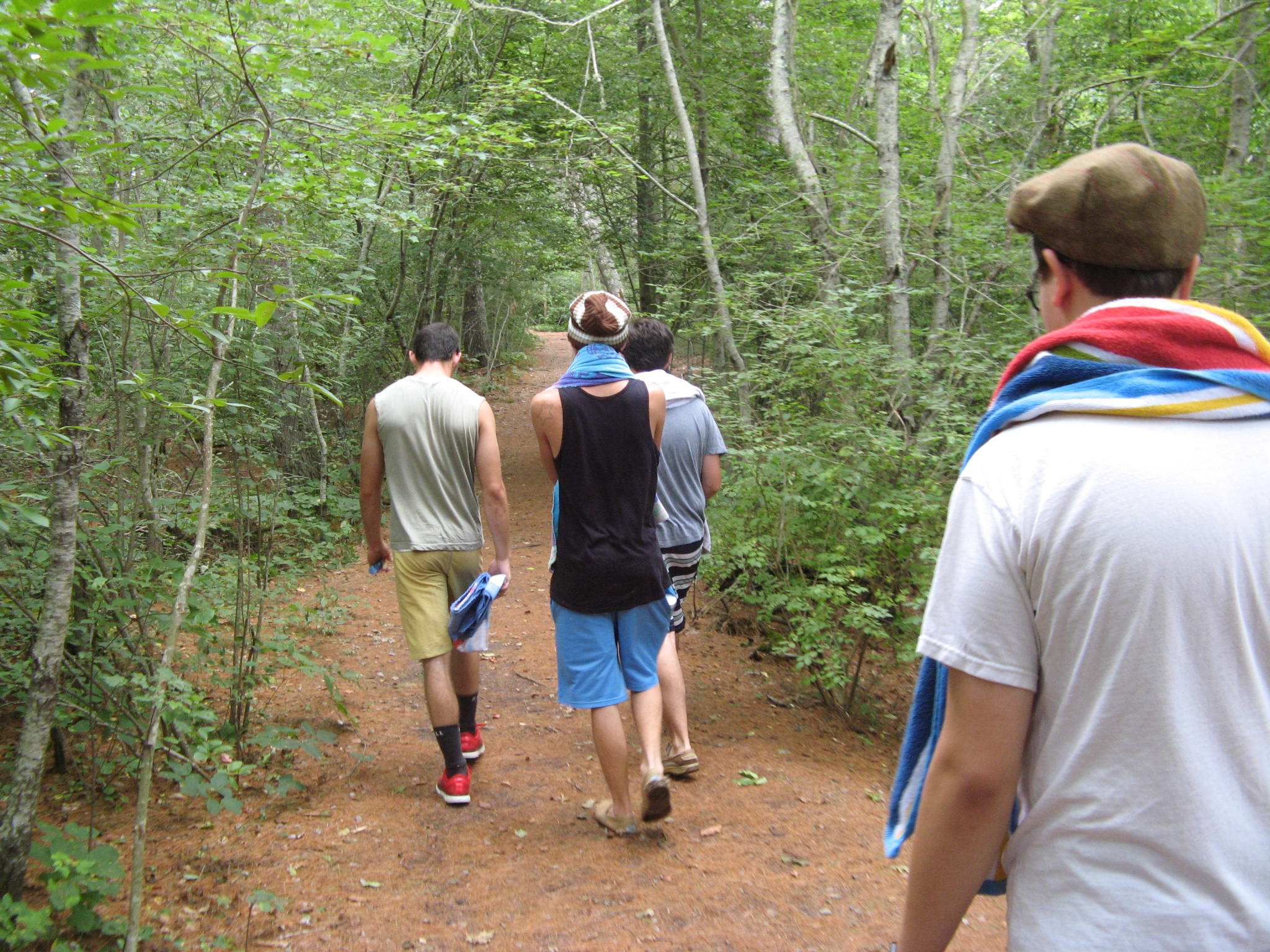 I remember that walk to the yacht club. I marveled at the rich people, weathered on Cape Cod, their families planted here like redwoods back when the Mayflower first kissed these shores. Every time we walked from Abby’s house to the bay, we passed it; the old tree with branches that swooped down as if to pick something up from the grass. I pointed at it, telling Abby it’s the tree Eve plucked the fruit from. It’s the old one! She was only a year younger than me, but she adored the ideas I allowed to flutter from my loose lips like butterflies from a cannon.

The tree grew from a spot halfway up the green hill to the left of the walking path. Its biggest branch reached down toward us, the pedestrians, before changing its mind and growing once more toward the sky. We jumped over this limb like a jump rope. We swung over and under it like a jungle gym.

We were the ants on the stem of a leaf.

After the tree ceased to amuse us, we continued on toward the yacht club to swim alongside the boats that the wealthy upper crust of the Cape sailed through the bay. They had a diving board installed on the end of the dock, above the area of sea between the boats, and we spent hours flying from it into the phosphorescence of the Atlantic. The sun dropped below the shallow horizon and then it was black. Microorganisms glowed for brief seconds as our hands swept past them, making it look like stars shot above and below us. Black, then white, then back to black.

I now see myself in Thailand four years later, walking to the top of a mountain. Rural Chiang Rai lies below us, waiting to see God open up the rainy skies. We hiked up the green-walled path soaking wet and happy. We were going to gaze upon the largest Buddha statue in the region, situated atop the peak. Halfway through the ascent, we started noticing orange robes draped around the base of the trees on either side of us. I stretched a finger out toward them and inquired of our guide. He told me they keep the evil away. I wondered why they believed in such small means of spiritual protection.

We crested the hill to find the white plaster behemoth situated peacefully atop his cushion. Buddha looked over the region below him, including us, the wee pedestrians staring up at him one hundred feet below. We prayed thunder and lighting over the false idol, but the skies answered only in rain. My finger realized its own powerlessness as it retracted to my side.

Back on Cape Cod, I had been looking for a poem to set my life on fire. I was looking for a moment that would suspend itself long enough for the cameras in my eyes to catch up. Perhaps passing by the elephant tree, I expected my deep-seated nostalgia to catch up with the scattered life I led as a high schooler. Maybe this is why I pointed; expecting my finger to press that invisible pause button so we could wander a world devoid of time.

Atop the mountain in Chiang Rai, I had been looking for fire from the heavens. I was expecting my God put on a show for my team and the inanimate Buddha as I prayed that lighting would strike the colossal deity. We simply got more wet standing there, waiting for our Lord to pick our fights for us.

I have found that time has still not caught up to my head, and the memories that fill it. Sunsets were always sweeter in hindsight, like the aftertaste of a fine wine, or the endorphins that flood the brain after a long bout of running. Trees never bent to accommodate our desires, but we exalt them nonetheless.

My finger is still extended at those trees; some dressed to keep evil out, and some bent to invite the children into the fun shade of their branches.

0 comments on “Pointing At Trees”