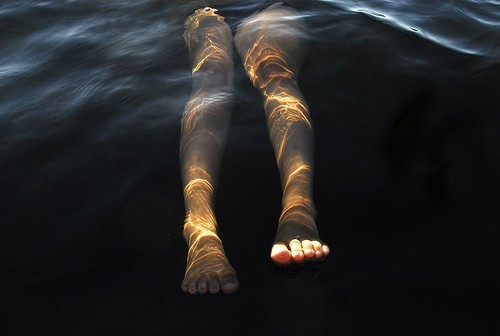 My name is Lifeguard. There is a lot of thinking that takes place atop the seat overlooking the pool. I spend most of my days there; watching others play. Watching them have fun. I see grandparents bringing their toddler grandsons and granddaughters to the pool to splash around. Young parents bring their infants to adapt to the life aquatic. High school sweethearts hang on each other, faux-drowning and whispering the deep secrets of their hearts into the ear of the other.

Time on the stand passes slowly. If you’re not careful, you can waste a whole day and not have thought about anything. The day can slip away into an ebbing tide of lusts for the barely-clad swimmers your age, or you can simply retreat into the room inside your brain where nothing happens. No thoughts are produced, and no ideas are conceived.

Lately, I have entertained my attentive brain contriving a man who follows me home after work each day. It’s a twenty-four minute ride to and from work on my bicycle. I think about a man following me home in his turquoise sedan.

He rolls down the window, arm hanging limply on the door, and shouts, “Ey, Lifeguard! I know where you sleep! Open ya window tonight and I’ll give ya a surprise!”

I think about how fast I’d have to pedal to outrun him every day. Of course, to eradicate all of his knowledge of my residence, I would have had to have done this from the start. I would need to pedal 9% faster, and lose him through the path behind Kum & Go, 4 minutes out of the way.

These scenes play out behind my eyes as I sit on the edge of the pool. It’s not a huge pool. It has a straight slide with a weak drizzle of water peeling down its shoot. Rust grows from the base of the object and is progressing upwards. The zero-depth zone is where the babies come and sit, joyfully splashing in the ankle-deep tide because they are unaware of what this place really is.

The center was built in the seventies and has not been maintained well. Patrons pay a base price of two dollars apiece, or five for a family, and come splash around for a little while. I work with two other guards on a double rotation. There’s Lindsay, the apathetic snob who clicks her gum loudly while her eyes are magnetized to her phone. Jerry is the other guard who lost his job three years ago when the economy tanked. He lost his wife with his work, and has been obsessed with conspiracy theories and UFOs ever since.

“Hey, Lifeguard,” Jerry says to me one slow day while the pool is empty, “you ever see the license plate of that dude you think of following you home?”

I don’t want to think about it, so I keep scrubbing at the scum line and pretend I didn’t hear him.

“Lifeguard, hey, you hear what I said?”

I looked up and sighed. “I haven’t noticed it, why?”

Jerry shrugged and went back to looking down at his cleaning. The truth was, I can picture it. It’s out of state, but I don’t know which one. I only know the colors were different.

Today is a busy day here at the pool. My eyes have glazed over and I have lost myself once more in deep contemplation. I picture the man who follows me home as working for a government of a different country. Or maybe I’m just making him up in my daydreams. Possible. It happened before. These hallucinations begin with a simple question, such as ‘what if there was an old lady who became a serial killer because she was so afraid of dying she killed everyone who talked to her? Now that’s paranoia.’

Thoughts like these lead to images in my brain that play themselves out. Often they become entire narratives. I have only shared a couple of them with another human, and that human has only been Jerry. He is the only other one who understands the brain-numbing boredom of working at this pool. He reads books on the stand. I can’t bring myself to, though, for fear that I’ll miss someone drowning. At least if I look like I’m watching, they can’t blame me for the oversight.

My brain thinks too much. Sometimes, it even makes up its own words. Like ‘slentor.’ That is, a being that can pass through walls. It originated one day while I was thinking about the concept of neutrinos, the sub-microscopic particles that travel so fast they pass through anything, and have only been seen twice. Or rather, the place where they just were was seen.

As my brain wanders, I’m at home and a slentor drifts into my bedroom as the television plays. It cannot speak, but it can point, and move metallic objects. It readjusts the antenna on my set and changes the channel to a ballet recital. Piano sounds fill the room and I drift to sleep. The slentor leaves. ‘What a crazy idea,’ I think as I drift off. ‘Things that can pass through walls…’

The pool has been busy in waves today, which makes the day crawl by even slower than usual. It fills up, then empties for an hour. The hands on the clock don’t even look like they’re moving. Maybe they’re not.

Lindsay is working with me today. I picture an electric can opener that operates by slicing the can in half and pulling the two halves apart and pouring the contents into a bowl. It’s all automated of course. It produces a knocking sound, like a knuckle on a giant, thin tin wall. The knocking continues and I realize that it’s not the imaginary object in my head producing the sound, but someone standing outside the back door of the pool.

This door is never used. It was originally installed as a back door for taking trash out to the dumpster. However, the pool doesn’t even generate enough trash to warrant a dumpster these days, and garbage is collected out front on Tuesdays. I don’t even think I’d ever seen the door opened before.

Two parents were in the four foot section of the pool with their baby, who cried every time they tried to put her head underwater. I figured they wouldn’t miss me for a minute as I went to open the door.

The knocking returned once more. It was very gentle still, but more urgent than the first round. I fidgeted with the lock and finally got it open. As I pulled it open, the rusty hinges creaked, and I looked at them. Before I could identify the knocker, my head was slammed with a drained tequila bottle and I fell unconscious to the ground. I picture no one reacting, and the family of three continue cooing at their infant daughter.

I tell Jerry about the daydream the next day. He shrugs and tells me he doesn’t know what’s on the other side of that door either.

We worked the whole day and at closing time, Jerry asks me if I’ve ever taken narcotics. I haven’t. He says maybe I should talk to someone about these daydreams. I tell him I’m not sure if they’re all daydreams.

I walk out the front door to where my bike is chained up. A turquoise sedan with a blue license plate is parked across the street with the engine quietly humming. I rub my eyes, look up at the sky, and back at the street. The car is gone. Figures.

I begin pedaling and ride to the edge of the town, down the shortcut path, about halfway to my flat. A slentor suddenly slides out of a tree to my right. It takes control of my bike and swerves the handlebars so violently to the right the I fly off and hit my neck on a baby tree to the left of the path.

I lay there for a while until I hear footsteps approaching from the street. I see old cowboy boots walk right up to my face as their owner inspects my busted frame.

“Nehh,” the man sighs and turns and walks away. I try to reach up and scratch my arm to see if this is a daydream and I’m really back at work seated on the stand. Neither arm stirs.

As my vision blurs more and more, and the setting sun fades the objects of the day into ambiguous dark shapes of the night, I hear a car come to a stop on the street, a baseball toss away from where I lie. The car door slams, but the engine stays on. In the dim light, I can tell it’s the man who follows me. Thought he’d be here sooner.

“What took you so long?” I gurgle out as my consciousness fades.

In place of an answer, he lifts a cigarette to his dry lips and cups his hand to light it. Still not sure if this is real. I mean, I don’t feel much pain. I just wish I could move.

I wake up in a basement next to a pool table with the green felt torn in several places. I am seated in a metal folding chair. I can move my arms slowly and clumsily, but my neck is frozen in place, tilted severely to the left. I turn my entire torso from side to side and inspect the room I am in. Old Playboy centerfolds pepper the walls, held up by tape over the corners. It smells like stale cigarettes and spilled beer. Empty booze bottles cover every surface. There are literally hundreds of them. The place is spurdent—another word I invented.

Even in my helpless state, I still make up words. Incredible. Most people would be extremely afraid right now. But my name is Lifeguard, and I have to think. Fear would only interfere with that right now.

I hear footsteps descending the stairs.

“Lifeguard!” the man shouts when he has neared the bottom.

I turn my body to look at the man. His left arm still hangs limply by his side, just as when I see him in his sedan. He stares at me for a second, and my mind races.

My training prepared me for this.

A pitbull upstairs began barking at the sound of the shots, and as he raced down the stairs, testicles in full swing, I popped a hole in his side as well. I went up the stairs and out into the bright morning sun. I got in the man’s sedan, found the keys under the seat, and turned the ignition until it kicked to life. Driving back to my flat proved more difficult than expected, thanks to my now sideways neck.

When I got home, I made sure to reload the three rounds I had spent.

My name is Lifeguard, and I just might be the old lady who is so paranoid she kills everyone else.